John L. and the Red Sox 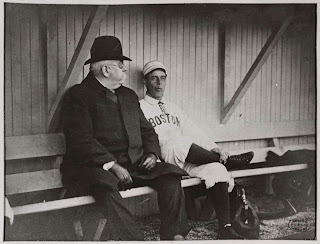 He may have only sported a brilliant handlebar mustache and not a full lumberjack beard, but no doubt that John L. Sullivan would feel a special affinity for the bewhiskered 2013 Boston Red Sox.

The “Boston Strong Boy” was a huge baseball “crank,” as fans were known in the late 1800s. As a boy, Sullivan rooted for the National League’s Boston Red Stockings and attended games at the nearby South End Grounds. During his boxing days, Sullivan would stand at home plate before games as Boston left fielder Joe Hornung threw balls as hard as he could at the champion standing on home plate. John L. hardly flinched as he let the baseballs bounce off his prodigious chest.

Sullivan, a decent ballplayer himself, played on numerous semipro teams. He boasted that he turned down a $1,300 contract offer from the Cincinnati Red Stockings to play with them during the 1879 and 1880 seasons, although a sporting newspaper reported years later that the team president could not recall such an offer. During Sullivan’s reign as heavyweight champion, big-league baseball teams such as the Philadelphia Athletics hired the champ for a day to pitch for their teams in exhibition games in return for half the gate. In 1883, 4,000 fans came out to the Polo Grounds to watch as Sullivan, clad in a white flannel uniform and pillbox hat, took the field with the New York Metropolitans.

After his fighting days were done, Sullivan periodically showed up at Boston’s ballyards to watch the Braves and the new American League franchise, which would become known as the Red Sox. Sullivan was in attendance at the first World Series in 1903 as Boston defeated Pittsburgh. He sat in the dugout before games with Boston manager Jimmy Collins.

The “Boston Strong Boy” even took to the emerald lawn of Boston’s new ballyard, Fenway Park, in 1917 as an honorary first-base coach at an all-star benefit game for the family of recently deceased Boston Globe baseball scribe Tim Murnane. Will Rogers entertained the 17,000 fans by galloping around Fenway demonstrating rope tricks before the Red Sox took the field against a team of all-stars that included “Shoeless” Joe Jackson, Ty Cobb, Walter Johnson, and Tris Speaker. As Sullivan took to the coaching box for the all-stars, he stood on the same field as another noted athlete, Sox phenom Babe Ruth, who toed the rubber as the starting pitcher after easily winning the pre-game hitting competition by launching a ball 402 feet. Sullivan had little work to do as Ruth scattered just three hits in five scoreless innings against a pantheon of baseball legends. On Fenway’s emerald turf, the lives of the greatest American sports superstars of the nineteenth and twentieth centuries briefly intertwined.

As a Boston boy partial to facial hair and a “crank” of the highest order, no doubt John L. would have a message for everyone today: “GO SOX!”

Posted by Christopher Klein at 8:07 AM No comments:

John L. always gave his birthday as October 15. His mother and father did the same. Instead of a Bible, the Sullivan family recorded the birth dates of John L. and his siblings in the front of Life of the Blessed Virgin and Life of Christ. The date recorded inside is also October 15.

Yet, the city of Boston birth certificate for John L. Sullivan lists his birth date as October 12, 1858, as you can see here. 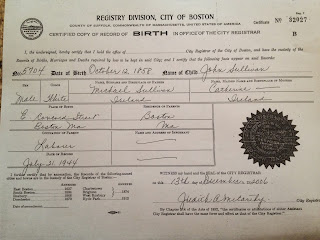 City records from the 1800s were susceptible to errors. Sullivan's death certificate, for instance, listed his incorrect age when he passed away. I would chalk the discrepancy up to a city error except for John L. Sullivan's baptismal record. According to the record I received from the Archdiocese of Boston, Sullivan was baptized on October 13, 1858, at St. Joseph's Church in Roxbury. Below is an older record of Sullivan's baptism: 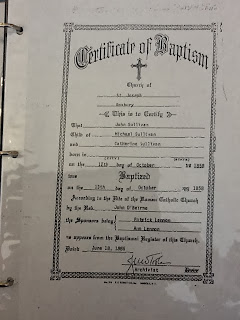 So who's right? God, country, or the "Boston Strong Boy"? I think in this case, church and state have got it right. October 12 is Sullivan's birthday.
Posted by Christopher Klein at 5:16 PM 1 comment: 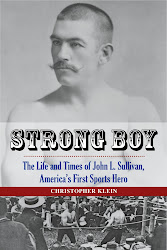